As we make our way through these bizarre days of virus quarantine, I think about what my grandfather experienced during the Spanish Flu epidemic of 1918. He was in his last year of medical residency at what was known then as Graduate Hospital, a now defunct teaching institution affiliated with the University of Pennsylvania Medical School in Philadelphia. That September, a Navy ship from Boston docked in the harbor and within days, 600 sailors were diagnosed, and the disease spread rapidly among the civilian population. With a significant percentage of doctors and nurses serving overseas in the Great War, massive responsibility fell to the student doctors and nurses, who, along with civilians, were left to care for the ill, often going directly into their homes. Philadelphia became the American city with the highest and most rapidly accumulating death toll in what was then the worst pandemic in recorded history.

I never knew the strikingly handsome, and I suspect, brilliant young intern who bravely ministered to Philadelphia’s Spanish Flu sufferers in 1918 as a not-yet-fully-licensed physician. I only knew the gentle and kindly man who cared for me during my typical childhood illnesses, dispensing various colored stomach potions and cough syrups from his black leather bag. I never knew my grandfather before a stroke caused him to limp, and as a sick child, the most soothing sound in the world was his sliding foot and thumping cane coming back the linoleum-floored hallway to my bedroom. My parents told me he saved my life when I contracted a particularly vicious form of  measles when I was very young, insisting that I be admitted to the hospital over the protestations of others. People in my hometown still tell stories about how my grandfather treated them or a family member with skill, compassion, and frequently, a robust sense of humor.

Now, 102 years later, there are more ships docked at the harbor. This time, they’re cruise ships filled with potentially sick passengers and we call it Corona virus instead of Spanish Flu. Despite our constant access to every detail of what’s happening, despite our modernized sanitation procedures and our exponential increase of scientific knowledge, we’re still at the mercy of nature. For the majority of us alive today, this is new and unprecedented territory.

We’re just as scared and discombobulated as the citizens of Philadelphia were in September 1918, perhaps more so, because of the constant bombardment of information. I suspect, that in our easy-access-to-everything world of 2020, we’re probably less resilient and less prepared than our ancestors were for a pandemic. Most of us simply are not used to hardship of any kind, even if hardship is defined as staying out of our favorite restaurants and bars, giving up social events and remaining in the comfort of our homes, armed with Netflix and Amazon Prime.

But what gives me hope is the dedication of the health care professionals putting their lives on the line for us throughout these difficult days. Not just those who speak for the government and the news networks, but the unsung heroes–the doctors, nurses, and maintenance people who are in the trenches, swabbing the nostrils of the potentially ill and swabbing the surfaces of every item we touch. A nurse friend recently remarked that just constantly getting in and out of the haz-mat clothing is exhausting in itself. In all of those people, I see the legacy of my grandfather and those that fought this same battle in 1918. I see  the same brave willingness to place a gloved, yet comforting hand on a sick patient, and the indefatigable spirit of caring that defines who we are as humans. 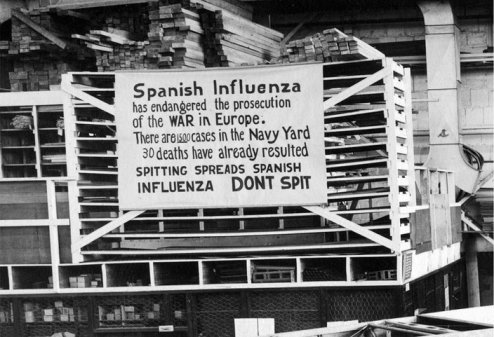 One thought on “Redux”