My husband and I just returned from a wonderful (albeit, cold) winter getaway in New York City. We heard a glorious Carmen at The Met and saw Network and Come from Away on Broadway. I have a special affinity for Manhattan because nine years ago, a brilliant surgeon there rebuilt my back and gave me a new life. Ever since, small-town dweller that I am, I occasionally need to ride the subways and walk on streets surrounded by tall buildings and by people who don’t look or sound like me, dine in interesting restaurants and feel part of a bigger world than the one I live in most of the time. Aside from being a Yankees fan, (which would not be welcomed in our house), I love New York.

This was an entertainment-driven visit and I didn’t expect to be so moved by things that we saw and did. We visited the Tenement Museum on the Lower East Side which is a collection of buildings once inhabited by immigrants who came to this country in the 1800’s. This is not a “famous place” museum but one that immerses visitors in the culture of the times, that opens a window into the lives of our intrepid forbears who did the jobs no one else wanted to do. Who were subjected to hardship and discrimination because of what they looked like or how they spoke or how they worshipped.

The individually guided tours here are slow-paced and invite conversation and thought. A gentleman on the tour with us who was a civic leader in Louisville, Kentucky shared that he had just received a text that a Hindu temple there had been graffitied and defaced, but he was confident the people of his city would come together immediately to undo the damage. I couldn’t help but think that nearly two centuries later, sadly, we’re still at it.

That afternoon we watched Brian Cranston in Network, a Broadway remake of the 1970’s movie about the decaying values of television. The famous line from this show occurs when Howard Beale, the aging anchorman played by Cranston, has a full-blown meltdown about the state of the world and screams, “I’m mad as hell and I’m not going to take it anymore.” Some days, I feel exactly the same way. The problems and frustrations of that era seem almost quaint compared to what we’re living with now, and I think many of us are madder than ever, but like Howard, we feel thwarted at every turn.

And then there’s Come from Away. Wow. The story takes place on 9/11 when planes headed for the United States were forced to land in Gander Newfoundland, a sleepy little town on the far eastern tip of Canada. Played on a sparse stage with twelve actors who effortlessly switch roles to portray different characters, it is a story of ordinary people coming together to deal with an extraordinary situation. 7000 people housed and fed for several days by a town a little over twice that size in population—loaves and fishes 2001. The night we were there, the Canadian ambassador to the United Nations gave a gracious introduction at the beginning of the show. He received a standing ovation.

When I visit New York, I remember my experiences there as a patient. Listening to the many different languages and accents spoken by the nurses and staff in the hallway outside my room. The two lovely eastern European nurses who hugged me the day I left and told me I was just “the best patient.”  The delightful Hispanic gentleman who cleaned my room, complaining to me about a patient who yelled at everyone. “I no’ go in there anymore. She batshit, man.” The African-American nurse who said, when I looked at my post-op face in the mirror one morning, “Don’t worry honey, you’re still beautiful. That man of yours is still going to love you.” 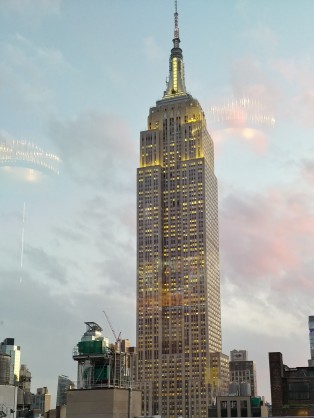 When are we ever going to figure out that we’re in this together? That we are connected, no matter how much we try to pretend otherwise. As I have grown older, I have developed a profound respect for other ways of looking at the world and living in the world. A trip to New York reminds me, once again, that we are all “from away.”

One thought on “New York State of Mind”